Tennis is the Best Wii Sports Game – Here’s Why

Tennis is hands down of one the best Wii sports games. If you disagree then ‘Wii’ have to talk.
If you answer yes to the following questions, then Wii Tennis is what you have been looking for. Here we go. 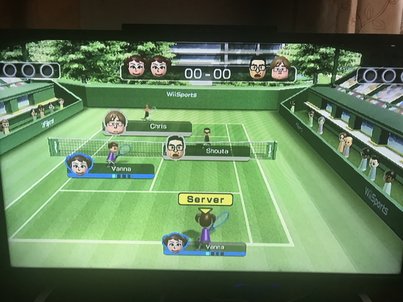 “Want to have lots of fun?”

“Want to involve the whole family?”

“Want to lose weight while doing so?”

Then Wii Tennis by Nintendo Wii Sport is the answer.

At this point, just in case you’re thinking it, let me categorically state that I’m not a teenage boy drooling over the novelty of playing a video game, I’m actually, a grown man in my 40’s and I’m definitely not a game head but when I find something that works then I just have to share it.

I have had my struggles over the years with my weight. I have tried going to the gym and many different weightloss programs but just couldn’t find the kind of disciple needed to follow through.

When I played Wii tennis for the first time it was purely to satisfy my curiosity, just to have a crack at it after seeing others having so much fun.

I never thought it would become a huge part of my weightloss plan and a great way for me to stay active even when my motivation to exercise is low.

Regularly playing Wii tennis is like acing an exam that you didn’t even study for.

Its tons of fun with a surprising benefit – I lost weight.

When losing weight is the byproduct of having fun, you know you have found something worth keeping.

And that’s why ladies and gentlemen I said the Wii sports tennis is a must have.

If not for its entertainment value then for its calorie burning component.

Just imagine satisfying your need for recreation and fun and before you know it you are soaking wet, yes you’re actually working out without even realizing.

By the way, I recommend wearing cotton clothing to absorb all that sweat.

I think the best thing of all its happening right there in the comfort of your living room.

Because of the fun I’m having I look forward to doing it every
day….yippie I have finally found my element of discipline to yield the results I been dreaming of.

Motion Sense doesn’t come standard on all remotes but if you want the best gaming experience you need to buy one with motion sensor.

The sensor technology on this game is out of this world, it’s ultra responsiveness translates your movements to the screen seamlessly as you swing the remote to rocket a serve, execute a backhand or forehand return or simply adjust the power and speed of your shot.

The graphics aren’t that realistic which seem to be an intentional fact considering how realistic the experience of being on a virtual court is, you can feel the pulsating effect of every swing of the rocket.

The remote even vibrates in your hand contributing to the intensity you would normally experience on the grass.

It forces you to come with your “A” game if you really want to play, the more you dominate the faster and stronger your opponents become.

So as your score improves, expect to be paired with pro level athletes, who will not take it easy on you.

The result is a cardio workout that is almost always sustained by fun if not the sheer determination not to get your butt kicked once again.

Due to the nature of tennis and associated rapid movements and swift swings, the remotes come with buffered silicone protective covers and wrist traps.

Before progressing to the court you’re prompted to adjust the strap tightly around your wrist so even if the racket, or should I say remote, should slip out of your sweaty palms it’s still hanging around your hand – saving your TV screen from an accidental collision.

Huh, I wonder if this is something they should consider doing to an actual tennis racket.

He, she and the Old Lady

This game is rated E for everyone, young, old and very old alike. I have had movie nights turned into games nights or should I say Wii tennis nights.

I really don’t want to call it an addictive drug as if to cast any dark cloud over something so enlightening but that’s exactly what it is addictive.

Many experts agree that regular exercise is better than any weight loss pill. Wii tennis can help you to get the right amount of exercise if your goal is to lose weight.

Understandably because of anticipation of spectators wanting to become instant players, this game can facilitate up to 4 players.

If you feel alone being a single player, there is more than enough company and with four players the fun is quadrupled.

With life comes emotions, living those moments on the court while you play Wii tennis has resulted in some of my family members reveling in victory after winning a game or just a single set.

I have even witnessed my 9-year-old son crying after being destroyed by the competition. That’s how absorbing this game can become.

It’s easy to play even young children can play it. My entire family plays it including my daughter who claims that she is in her five’s.

At times as a parent you are busy and in those moments the second you noticed that your kids are quiet then you know they are up to no good, well Wii tennis is a great distraction for kids and is productive
time spent for fun and exercise.

The remotes come with rechargeable battery packs, the manufacturers know you will be playing often and don’t want you breaking the bank to buy all those batteries.

There are no disputes over points earned in each set awarded as each is confirmed by an instant replay.

The Wii sports CD offers other games but Wii tennis is the real reason for its popularity.

Including in its suite of games are golf, bowling, baseball, and boxing, so you don’t need to go to a golf course, the bowling alley and as it relates to boxing you don’t have to leave your home to get a virtual beating.

There is no surprise why Wii tennis is the flagship of Wii sports, while I may explore the other games I always go back to tennis, I guess nothing can beat the fun and energy it brings.

This Game takes You In

You’ll be impressed by the Mii avatar feature which allows you to customize a virtual version of yourself.

This capability literally brings the characters to life. My entire family has created resembling versions of themselves; this really puts us in the game.

Being able to see yourself, or a version of yourself moving
about on the screen has really elevated this game to a different level capturing the love of gamers and non-gamers alike.

The Bottom Line – Why I chose it

Wii Sport’s Tennis is tons of fun, it’s easy to play, even if you have never played tennis before in your life. That is why it has won my vote as the best Wii sports game.

It pulls you onto the court and works you out. Yes in that same
order. You don’t have to live in the gym to get a good workout you already live at your home, so just get a Wii sport bundle with tennis.

The psychological value that is added by the fact that playing Wii tennis outperforms any self-will you need to stick to a weight loss program.

Remember it takes little to no discipline to engage in activities that you consider fun and entertaining but a great deal of motivation and discipline to keep up a routine to lose weight and keep fit.

The solution that works for me, Wii Tennis from Wii Sport. Get it, try it, sweat it, and love it. Maybe you will also think that it is one of the best Wii sports games ever.

What is the best appliance brand for kitchens? They all have the same surprising flaw

Related Articles
We will be happy to hear your thoughts

We are participants in the Amazon Services LLC affiliate program. Please note that prices change quickly on Amazon, so you will need to confirm prices on Amazon.com.

Quick Categories
For vendors
Sign Up for Weekly Newsletter

Get Trending Products by Email.